Diary of a Wedding Videographer {2}

This week, I was given a guided tour of a lighthouse, filmed Lisa & Iain's wedding and caught up with Jo & Geoff at Knight's Hill Hotel to talk about their wedding in April...

On Thursday, I attended Lisa & Iain's wedding rehearsal in Happisburgh, on the Norfolk Coast. The village itself is famous for its lighthouse and, as Lisa's family live right next to it, I really wanted to feature it in their wedding film.

I contacted the team that maintain the lighthouse and was fortunate enough to be allowed to film not just from the top, but actually outside at the top!

I'm not going to lie, it was quite a hair raising experience, not just because it was crazy windy, but also because the railings are, if I remember rightly, only 70cm high! It was absolutely amazing though and I got some great aerial shots of the couple's church across the village.

Those shots I'm keeping under wraps for the couples' film, but I couldn't resist taking a few photos on my phone for this post, to show off some of the unique features in the building.

I would highly recommend a trip to Happisburgh Lighthouse so check out the upcoming open days at www.happisburgh.org/lighthouse/open-days

My 2017 wedding season kicked off in fantastic style with Lisa & Iain's wedding in Happisburgh and Southwood Hall on Saturday.

Lisa got ready at her mum's house with her bridesmaids, and the girls had a real giggle while having their hair and makeup done. I love this point in every wedding day when the excitement is growing and everyone is looking forward to the day ahead, the feeling is contagious.

On Sunday morning, I started editing the footage of the girls and have been drooling over Lisa's dress and shoes. Here is a sneak peak at Lisa's bridal shoes by Roland Cartier... I need these in my life! I could totally wear them on the school run, right?!

I had a little break from editing on Sunday afternoon to meet up with Jo and Geoff, who are getting married at Knight's Hill Hotel, King's Lynn, in a few short weeks. They are such a fun couple, and it was lovely to hear about all the finer details of their wedding day, so that I can start to build a picture of their film in my head. Hearing all about how their paths had crossed throughout their lives properly gave me goosebumps too. This couple were destined to be together!

Right, back to editing! Catch you next week xoxo 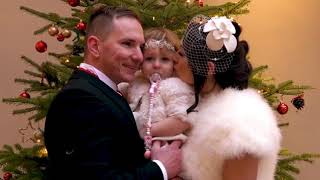